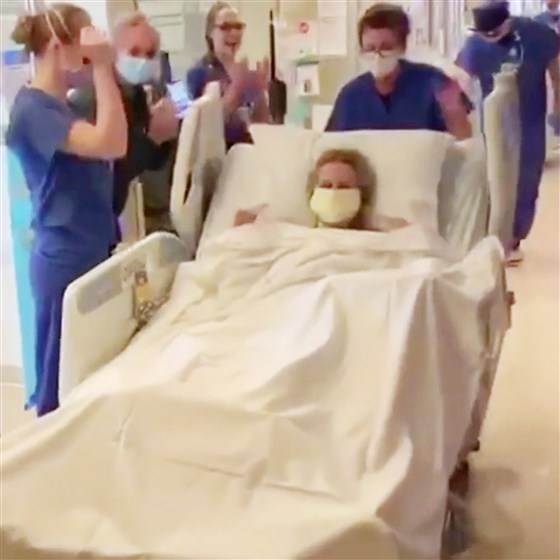 A woman who suffered from severe COVID-19 complications and gave birth while in a medically induced coma met her baby boy for the first time as she left the hospital, surrounded by cheering hospital workers.

The moment was captured on mobile phone video as Yanira Soriana, 36, met her little boy, who has been named Walter.

Doctors felt they needed to put her into a medically induced coma and then put her on a ventilator.

They then performed an emergency Caesarean section because her life, and the life of her baby, was in jeopardy.

Yanira spent 11 days on the ventilator.

She was at Southside Hospital in Bay Shore, one of New York’s hard-hit areas.

Her baby was transferred to a children’s hospital while she recovered.

Doctors did not know if she would survive or not.

On Wednesday, however, Yanira went home with baby Walter in her arms.

The entire hospital lined the hallways to give her a poignant send-off, congratulating her on her amazing recovery.

In another case, 27-year-old Washington woman Angela Primachenko was placed into a medically induced coma at 33 weeks pregnant after being diagnosed with COVID-19.

She was fighting for life on a ventilator when doctors induced labour.

The new mum was taken off her ventilator on April 6, and one look down at her body told her that her baby must have been born.

The little baby girl has been named Ava.

“So she’s our new little breath of life.

Concerns over US terror threats rising as Taliban hold grows