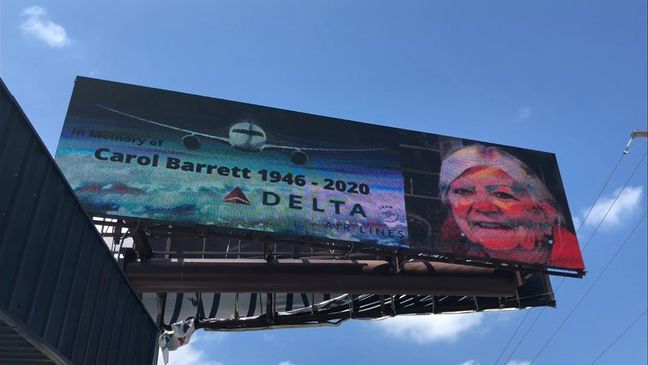 She is being remembered and honored on a billboard outside the Pensacola International Airport for her 40-year career in the skies.

Barrett was considered by many to be a larger that life person. She was also known by her friends as ‘Gabby’.

After leaving her job as a school teacher in Sacramento, Barrett began working as a flight attendant for Delta Airlines, where she would for work for the next 40 years.

Her dear Friend Debbie Naylor says Carol was one of the kindest people you will meet.

You knew wherever she went there was going to be so much joy & happiness, says Naylor. She would be the most joyous, happy and fun person you ever met, she would welcome you instantly would feel like you knew her for a million years.

Before being hospitalized three weeks ago, one of Carol’s friends told me she was in great health, saying her love of life never slowed down.

Off-Duty Pentagon Officer Shoots Teen Who Tried to Rob Him