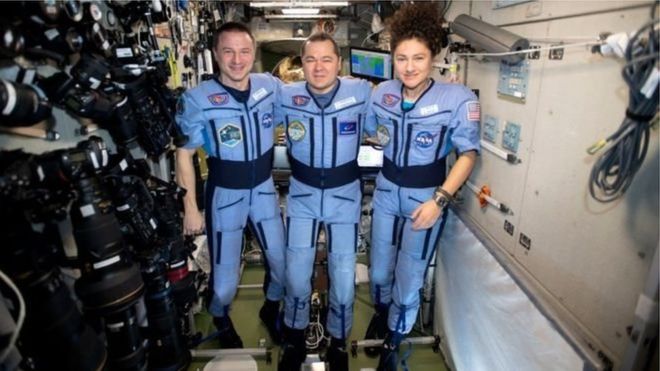 Three astronauts returned to Earth descending from a journey that took more than two hundred days to find they had changed completely.

Russian Oleg Scripuchka and American Jessica Meir set out on a trip to the International Space Station in September 2019, to catch up with Andrew Andrew Morgan, two months earlier in July, before any trace of Covid-19 was shown.

The Corona epidemic usually changed the arrangements that followed the astronauts returning to Earth.

Meir told reporters in a video call before landing that the view of the earth from high altitude is always wonderful. And it was very difficult to believe that all these changes occurred during our absence. “

The three astronauts landed on Earth at 05:16 GMT, after Scribucka and Meir spent 205 days in space, while Morgan completed 272 days.

And the International Space Station described on Twitter how the spacecraft “Soyuz” split into three vehicles before one of them reached the Earth’s atmosphere early Friday morning and landed successfully in Kazakhstan.

And the NASA released a video clip showing astronauts while a reception team wore masks.

The reception team underwent a strict isolation process, and it is believed that its personnel conducted Corona tests prior to starting the task of receiving the returnees for fear of infection.

In normal circumstances, the reception team will pick up the returning astronauts from their flight and take them to the nearest airport where they travel home. But Kazakhstan is in a state of emergency and most airports are closed.

However, the Baikonur space port, which Russia rents from Kazakhstan, is still in operation and from there the three astronauts will take off to their home countries.

Another alternative crew of two Russian and three American astronauts went into space on the International Station on April 9. This crew took maximum measures not to carry the Corona virus infection into space, as its members spent 45 days in quarantine before setting off.

The returning team from space usually undergoes a several-week rehabilitation program. After staying for a long time without gravity, the body needs time to get used to the life of gravity again.

This time, an additional task that lies with the doctors involved in the space crew is to protect it from infection with the Corona virus.

“It will be difficult for us to receive our family and friends in the arms after the absence of many months,” Meir said in the video call she made before returning to Earth.

Meir made history last year after the first spacecraft completed all of its female members with another NASA astronaut, Christina Koch.

Meir added: “I fear that I feel more isolated on the ground than I feel here. We are busy here with wonderful tasks that make us forget the feeling of isolation.”

The International Space Station has been orbiting the Earth since 1998, and is managed by five parties: the United States, Russia, Japan, Canada, and the European Space Agency.

5, including a child, killed in Georgia

Hunting theme no longer mandatory in US duck stamp contest