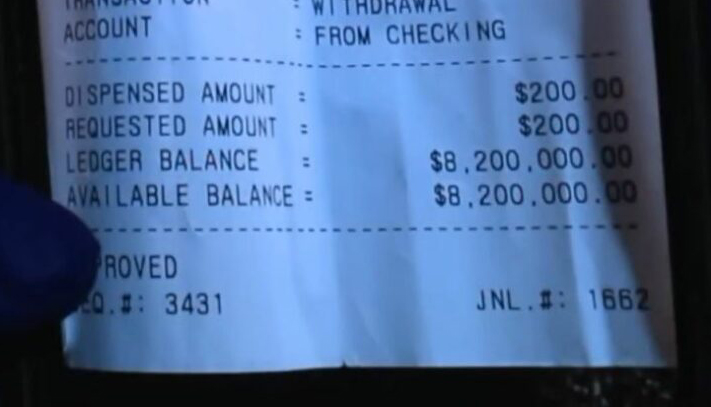 Charles Calvin, from New Chicago, Indiana, was expecting to see a payment of $1,700 from the Internal Revenue Service (IRS) after the first payments were deposited to bank accounts across America

Calvin, a volunteer firefighter, couldn’t believe what he was seeing when he checked his balance at an ATM over the weekend. So much so that he had to double check and then triple check to confirm it was real.

I went to the ATM at the Family Express and once I withdrew $200 out of my account I looked at the available balance still left in my account,’ he told .

When he saw the $8.2 million, Calvin just assumed the machine was malfunctioning or was throwing up an error of some kind so he ran his card again – only to find the exact same amount was staring back at him. ‘I ran the card again, and again. $8.2 million. I was like, “man, something’s up with this he said.

He called his bank only to be told they couldn’t see the $8.2 million in his account and it was no longer there. However, they did tell him his $1,700 stimulus payment had been deposited.

As a result of the error, the volunteer firefighter has been left wondering if it was some sort of fluke and if taxpayers are receiving way more – or less – than they should. ‘It does give you pause and make you think what’s going on,’ he said.

Calvin still isn’t sure if the money was deposited as a result of an error on the federal government’s behalf, or if his bank or the particular ATM he used were responsible, with the volunteer firefighter adding: ‘If there’s some kind of clerical error or what have you, they should be on top of it.’

Most people should receive their deposits from the IRS in the coming days, starting with taxpayers who’ve filed returns for 2018 or 2019 and signed up for direct deposit with the IRS.

Either way, Calvin said he’s just happy he did end up with the amount he was entitled to, saying: ‘But hey, I guess once you’re poor you don’t have anywhere else to go but up.’

Icy roads are causing accidents across the Nashville

Afghans in India call for refugee status after Taliban blitz