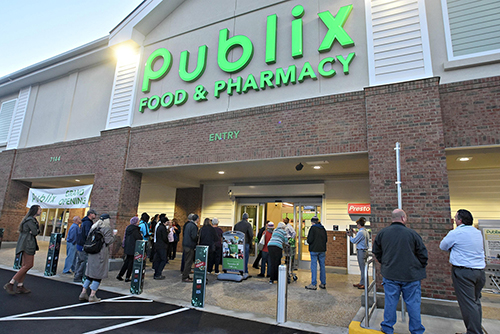 Riviera Plaza was previously home to tenants that included Misha’s Cupcakes, Subway and Riviera Theatre, the majority of which had moved out earlier this year. Records filed with the city of Coral Gables show that the seller secured a building permit for the new Publix in March 2019.

The $10 million store will likely replace the Publix nearby at 1401 Monza Avenue, which Publix has owned since 1979. It’s store No. 94 for the grocery store chain.

Riviera Holdings Plaza paid $16.5 million for the 55,000-square-foot office and retail building in April 2015. It sits on a 1.15-acre lot, near the University of Miami and the Shops at Sunset Place in South Miami.

Publix is one of the few essential businesses that have been allowed to stay open during the pandemic. The grocery store giant is also a major landlord in Florida, and waived rent for two months to all businesses operating at Publix-owned shopping centers, beginning in April. The company also said it was waiving two months of payments for common area maintenance fees and taxes.

Of the company’s 1,239 supermarkets, Publix owned the land and the building at 351 locations, according to the company’s annual report. Last year, it paid $70 million for the Publix-anchored Doral Plaza Shopping Center.

Man raped woman in her own home after she turned him down on Plenty...

2 thieves save a store owner from death