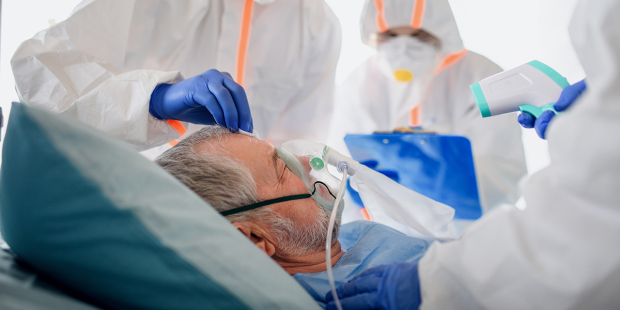 Doctors revealed that a 42-year-old American man had been infected with the Corona virus, after going to the hospital due to testicle pain

The man reported no coughing or shortness of breath, which is a symptom of COVID-19, but he suffered from a fever that disappeared after two days. His doctor urged him to seek emergency help because of pain that resembled “stabbing” in his testicles, stomach, chest and back, lasting for a week.

Paramedics revealed that his testicles were “normal”, and no suspicious matter was shown in the chest X-ray images. However, he was diagnosed with pneumonia soon after, when a CT scan revealed, his lungs had not been shown by X-rays.

Two days later, the unidentified man from Massachusetts was confirmed to be infected with the life-threatening corona virus. His doctor failed to tell ER doctors (intensive care) that he had been tested for corona, after attending a conference in Boston linked to several cases.

This means that the man was treated by doctors who did not wear PPE, and he sat in the waiting room with other patients for two hours before treatment.

Doctors at Harvard Medical School did not say that testicular pain was an accident, but they warned against the atypical effect of COVID-19.

The case report comes after the concerns of scientists in China, who in February claimed that the virus might attack the male genitalia.

The team speculated that the virus binds to cells frequently found in the testes, and may lead to “tissue damage

However, other experts have since stressed that men do not need to have concerns about their testicles amid the epidemic, until strong research is conducted.

Two doctors at Harvard Medical School described the “atypical” state of the Corona virus in the American Journal of Emergency Medicine. They wrote: “We present this case as a lesson learned from the front lines and to raise awareness of unconventional cases of COVID-19, as part of their continued emergence.

It was reported that the man was treated for constipation by the family physician, before being asked to go to A&E. For 8 days he suffered “persistent pain” in the abdominal area, back and testis, and reached his chest.

Despite suffering from a fever for two days earlier, he had no cough, sore throat, or shortness of breath, which is a clear symptom of the new Corona virus.

The main stomach, Dr. Jesse Kim, said that the physical examination found nothing abnormal except for some stomach weakness. When the man performed a CT scan of the abdomen, specialists found a suspicious matter in the base of his lungs, a damage that is proportional to pneumonia, which can occur as severe complications of COVID-19.

The next day, the man and his medical team were informed that the COVID-19 test was positive.

Dr. Richard Finney, a urologist in Birmingham, said that he had not encountered any COVID-19 complain of testicular problems. There are some viruses that can affect the testicles, such as mumps. Time will only determine if COVID-19 also affects the testes. “

To date, no study has demonstrated that the virus will damage a man’s genitals, or reduce fertility or sexual efficacy.

But scientists say this is theoretically possible, based on how the virus enters cells, through a receptor called ACE2.

The virus could have appeared by chance at the same time that the patient had a bacterial infection, causing pain in the testicles. The Harvard team did not provide any explanation for why the man had testicular pain.

Shot 2 at Mather Street in Hartford

12 killed in a shooting accident