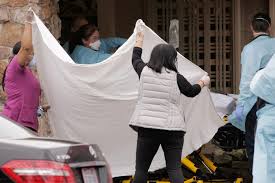 The United States needs to ramp up testing for the coronavirus as the White House considers when and how to lift stay-at-home restrictions and lockdowns triggered by the pandemic, U.S. health experts said .

More than 2 million tests have been done in the country so far, but the tests are not available to many, who need them, said Dr. Stephen Hahn, commissioner of the Food and Drug Administration.

We need to do more, no question about that,” Hahn said

The lack of adequate testing has hampered the U.S. response to the pandemic, which has killed more than 21,300 people in the country and infected more than half a million.

President Donald Trump last week played down the importance of testing, saying, “It’s not necessary but it would be a good thing to have.”

Top experts on the White House coronavirus task force have made it clear testing is important, however, particularly as the country takes its first steps toward reopening, a move the Republican president has said he wants to make as soon as possible.

The governors of New York and New Jersey, as well as the mayor of hard-hit New York City, pleaded for more test kits and testing capability.

Further ramping up testing, both diagnostic as well as the antibody tests, will really be necessary as we move beyond May and into the summer months and then into the fall, Hahn said.

Diagnostic testing determines if somebody is infected with the virus and antibody testing shows that has been infected and is therefore immune. Both will be important in getting people back into the workplace and containing the virus as that happens, the experts said.

“When one starts to relax some of those restrictions, we know that there will be people who will be getting infected. I mean, that is just reality,” Dr. Anthony Fauci, director of the National Institute of Allergy and Infectious Diseases, said on CNN’s “State of the Union.

“The critical issue is to be able to, in real time, identify, isolate and contact trace. That’s called containment.

The FDA is working with developers around the country to try to ramp up diagnostic testing, Hahn said.

So all hands on deck to try to get more diagnostic tests in.

The FDA has approved one antibody test and Hahn warned that some other tests on the market may not be accurate.

Governor Phil Murphy said New Jersey has been able to test only symptomatic patients and needs more testing to stay ahead of the virus.

He told CBS “Face the Nation” he had been in intense discussions over the weekend with leaders in neighboring states on the whole question of testing, contact tracing, what are the rules of the road going to be for things like bars and restaurants to make sure we don’t have unintended consequences on one side of the river versus the other.

His New York counterpart, Andrew Cuomo, said they needed more tests, more federal help and a public health strategy that is consistent with an economic strategy.

The last thing we want to see is an uptick in the infection rate,” Cuomo told reporters.

De Blasio told reporters he wanted a Phase Two test plan to focus on communities of color, low-income communities and immigrants and said he needed 110,000 individual testing kits this week.

To reopen safely, U.S. communities must be able to verify whether anyone who has symptoms has contracted the disease, said Dr. Tom Inglesby, director of the Center for Health Security at Johns Hopkins University.

Right now, we can’t do that in most places in the country, there’s just not enough capacity. We need to be able to have the capacity, he said

Here are your chances of getting a breakthrough COVID-19 case