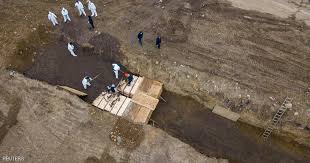 The local authorities in New York decided to bury the people who died as a result of the unclaimed Corona virus in unmarked mass graves on the island of Hart designated for the burial of unknown and poor people. Workers hired for burials in this cemetery, one of the largest public cemeteries in New York, have buried nearly a million bodies. New York recorded 160,000 cases of coronavirus, more than any country outside the United States, including those most affected in Europe such as Spain and Italy.

The United States of America continues its struggle to prevent the Corona epidemic, which claimed 18,586 deaths according to the latest official toll announced by the authorities on Saturday, and thus closely approximates the death toll recorded by Italy (18,849 deaths)

US officials confirmed that the people who died as a result of Coffid-19, who was not claimed, are buried in unmarked mass graves on Hart Island in New York by workers contracted specifically for this task.

Hart Island is one of the largest public graves in New York, where about one million bodies are buried.

The one-mile long island of Hart in the Bronx was bought by the city from a landowner in 1869 and turned into a cemetery to bury the unknown and the poor.

The New York authorities used the site 150 years ago to bury the abandoned corpses and those that have not been claimed by anyone or the corpses of state residents whose relatives were unable to secure the cost of the funeral and burial.

“We will continue to use the island this way during the crisis,” said a spokesman for the city government.

And 25 people are being buried on Hart Island a day since the new Corona virus began to spread last month, while such a number was buried a week earlier.

New York recorded 160,000 cases of coronavirus, more than any country outside the United States, including those most affected in Europe such as Spain and Italy.

The state had 7,844 deaths, accounting for nearly half of the deaths in the United States.

Each year, 1,200 bodies are buried, as the bodies are placed in pine coffins in trenches. There are no tombstones, but only small white marks indicating the trenches.

The site has been run by the New York Department of Prisons for a long time, and prisoners from the nearby Rikers Island which has the worst US prisons are used to bury the dead, but this did not happen in the case of Coffed-19 deaths, as “contract workers” were used according to Speaker.

The site has been banned from the public for decades, but in recent years visits have been permitted on certain days.

The island was also used to bury AIDS victims over the years, as well as a prison during the American Civil War, a sanctuary for people with mental illness, tuberculosis patients, and even a missile base during the Cold War era and is often referred to as the “Island of the Dead” in New York.

Basques pledge to maintain their traditions even as immigrant generation passes

‘What he did to Christian was just evil’: Family speaks out after 21-year-old killed...