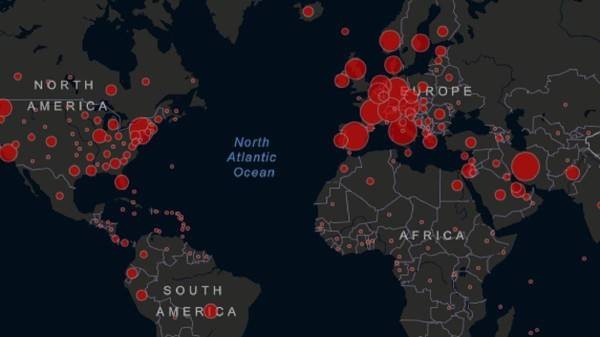 The United States reached a bleak phase in its battle against the coronavirus more than 10,000 people died due to COVID-19 in the country.

There were 10,335 deaths as of Monday afternoon, according to Johns Hopkins dashboard, which tracks numbers.

This total number exceeds the number of deaths in battles from six American wars combined, according to data from the US Department of Veterans Affairs.

VA data says that a total of 9,961 soldiers died on the battlefield during these six wars: the American Revolution, the War of 1812, the Mexican War, the Indian Wars, the Spanish American and Warrant Desert Shield / Desert Storm. The data does not include other war-related deaths.

US officials have repeatedly likened the coronavirus outbreak to a military struggle, and members of the armed forces joined in various efforts to help stem the spread of the virus.

The USNS Comfort Naval Hospital ship was dispatched to Manhattan to help increase the city’s medical potential. National Guard and medical personnel have been deployed to assist the severely affected areas

Over the weekend, officials warned that the coming days will be a major crossroad in efforts to contain the virus.

Surgeon General Jerome Adams said that this week may be “the most difficult and sad” in the country so far. Adams said: “This will be the moment of Pearl Harbor, the moment of 9/11, and it will not be local.”

Virus hotspots are expected to reach the peak of deaths this week. Societies that have not seen a significant rise in deaths in a critical window to prevent an outbreak in the coming weeks.

The United States has more than 1,000 deaths a day, which is more than twice the number of deaths among America’s deadliest diseases – lung cancer and influenza.

There is some good news: Federal health officials said there are signs that the outbreak may peak in some hard-hit areas like New York City and Washington State.

Pyrex said social separation measures are effective in limiting the spread of the virus.

Coronavirus patients often suffer from a weeks-long battle with the virus, which means that the death toll often reflects infections that occurred weeks ago.