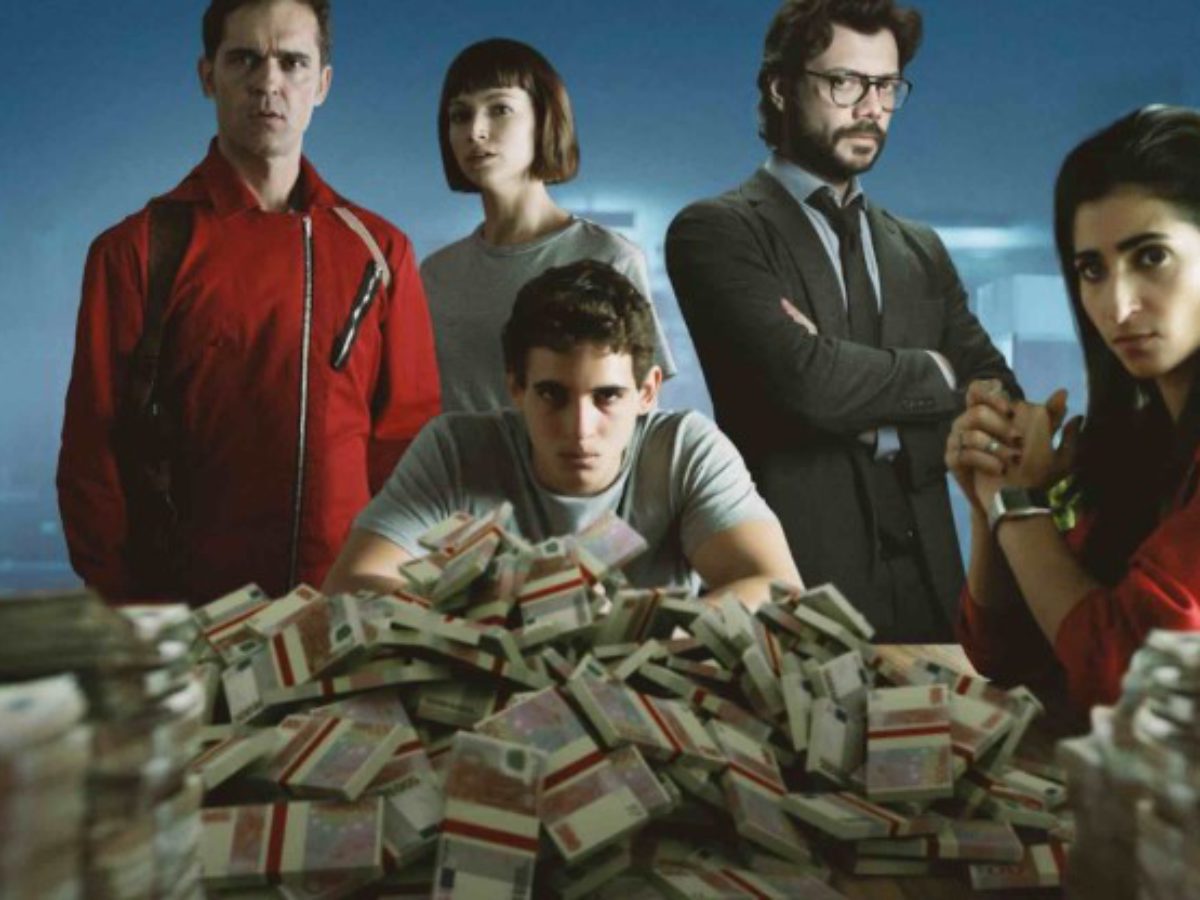 Money Heist’ part 4 sees the heist crew back in the casa to mint some more of the drama and thrills they’re best known for serving. After 3 runs, the show’s winning formula still seems to work. With a team stuck in the bank to save, a Dali-masked revolution outside and the increasing tension, will the crew survive another money heist? And will the show survive the new season curse?

Money Heist titled La Casa de Papel in Spanish is one of those shows you shouldn’t bother watching if you haven’t watched it from the beginning. The gripping show is like an extended heist movie except it gets pacier with every episode.

And they kept it up for 3 seasons straight which is rather impressive.

To Netflixers it is the highest viewed, if not the only viewed Spanish language show. Money Heist, created by Álex Pina is down to its 4th season with the Professor and his masked/unmasked crew having completed a successful heist at the Royal Mint of Spain have made a comeback to mint some more of the drama and thrills they’re best known for serving. That being said, it has been a while since we saw The Professor (Álvaro Morte) and his criminal ensemble. Rio (Miguel Herrán), Tokyo (Úrsula Corberó), Helsinki (Darko Perić), Nairobi (Alba Flores), Denver (Jaime Lorente), Stockholm (Esther Acebo) etc. back in action donning Dali masks.

For a quick memory jog, while Part 2 ended after the completion of the heist of the Royal Mint with the team splitting up to avoid getting caught by the police. Rio breaks rules a little early by trying to contact Tokyo in Part 3. All hell breaks loose when Rio is taken in by the police while Tokyo gets the team to reunite to save him.

The reunion comes with The Professor introducing the team to new member Palermo an old friend of Martin’s. Post the heartfelt reunion, the team is back to its usual grind in the Bank where they successfully rescue Rio. But it isn’t a happy ending. By the finale of the season, Nairobi gets shot after being lured towards the window in hopes of seeing her son, taking a critical hit. The much in love (with the Professor) Raquel (Itziar Ituño), now Lisbon, gets captured by cops for being in cahoots with the heist man. To end it on a cliffhanger, Sierra (Najwa Nimri), the replacement interrogation expert made her capture seem like an execution.

And it just looked like the beginning of the Professor’s mental and emotional breakdown. With a team stuck in the Bank to save, a Dali-masked revolution outside and the increasing tension, will the crew survive another money heist?

I’ve been following Casa de Papel for a while now and I have no shame in admitting that I watched all of Season 3 in a day binge-watching from start to finish. The comeback curse seemed to have failed and unlike many shows that fail to create the magic of their initial run, this one seemed to be exempt to that law. Season 4 was watched in a similar fashion in quick succession. While I won’t get into the details of the whole season, I watched the premiere and the first 4 episodes for the review so that you don’t have to. Is Money Heist Season 4 worth watching? Read on before you settle in with high probability of avoiding other important quarantine business-

Money Heist Part 4 begins with some really twisty sequences. On one hand, Nairobi is being desperately pushed into surgery to remove the bullet that went through her chest. On the other, the Professor has his own wounded heart to worry about on his escape from the police who are out all-guns-blazing looking for him the forest where he initially planned his escape with Lisbon.

With the presumed death of his beloved on his mind, his part of the plan seems to be failing already. Back in the bank, its business as usual, except new entrant and designated leader Palmero and Tokyo are about to have a power struggle.

Tokyo wants to rely on her gut, the same instincts that have repeatedly gotten the gang in trouble. In the same casa, Rio is dealing with his break-up with Tokyo and his trauma from being tortured by the police. Denver is also struggling with his own trauma and is prone to lashing out. It’s safe to say that none of the members are doing alright. Matters of the heart are getting messier, the plan is falling apart and the cops aided by Sierra are quickly gaining on the crew.

What really works for Money Heist is the constant state of curiosity it puts you in. Like those in action on screen, you’re drawn into nail-biting suspense. You will also find yourself forgetting who the bad guys are, something the show plays with, another thing that works. Part 4 is more of a continuation of the winning formula.

To me, the premiere still felt different because the Professor is different. For the first time we see the mastermind dealing with emotional turmoil, backed into a corner and desperate to improvise, something that his scheming brain hasn’t done in years. We’re repeatedly told that the heist plan has been in the works for years and only those who have been invested in it for years get to call the shots.

And yet it’s the reckless Tokyo trying to call the shots inside the Bank and it’s the professor’s improvising heart making decisions on the outside. Roles have been reversed, temperaments have changed within the characters and so have the dynamics in the police tent perched firmly in place to monitor the Bank as usual. The arm twisting here is fun to watch and I have a feeling it’ll never get old. That being said, the first few episodes is also where I witnessed my first predictions coming true. Is Money Heist getting rusty in its bid to keep the heist extension going? Not in the first 5 episodes. The rest, only the finale will unfold.

Which ZIP codes carry the highest COVID risk? This map breaks it down