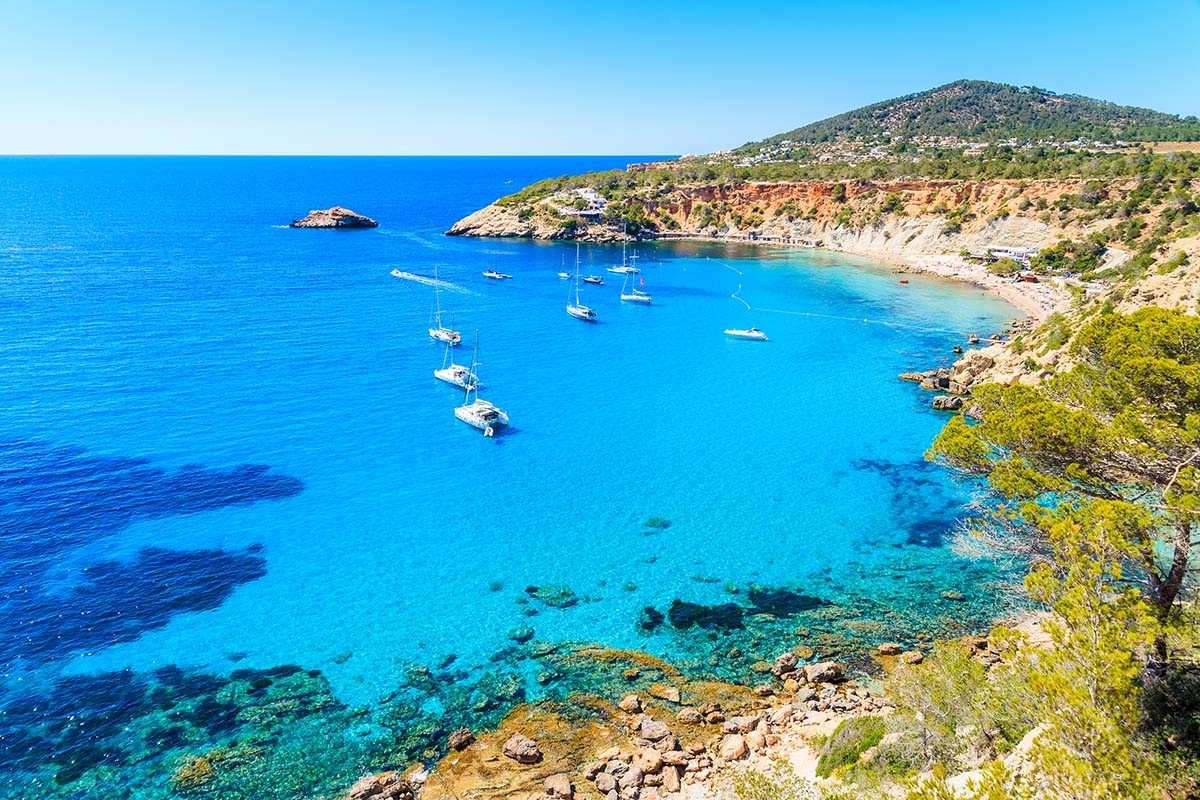 Mention the Balearic island of Ibiza to anyone in the know, and the most likely response you’ll get is a knowing smile and a reminiscent nod. With its reputation as THE party capital of the world, with its hedonistic nightclubs and twenty-four hour clubbing atmosphere, it’s an understandable mistake to make in thinking that is all this wonderful island has to offer. However, behind this dance music-led façade, you’ll also find some of the top beaches in Ibiza are also some of the best in the Mediterranean too.

If you’re looking for a peaceful escape from the better-known party aspects of Ibiza, then you can’t go far wrong with the beautiful retreat that is Benirras beach, found on the north of the island. Famous for being associated with drug-fuelled nights of debauchery back in the ‘sixties, today Benirras is a haven for the more sedate traveler. Laying in seclusion at the end of a long and windy road, the beach is the very picture of a perfect idyllic setting: deep blue seas surrounded by overhanging cliff faces and golden sands. The best part about this particular beach is that there is a protection order in place stopping hotel owners from building on it – a rare event in today’s world, and another reason why it was recently voted one of the top beaches in Ibiza.

Another of the more relaxing beaches in Ibiza is the Cala Llonga, which is situated just slightly north of Ibiza town itself. Although the beach itself is fairly small, it has a surprisingly deceptive depth to it, enabling it to accommodate many more beach-goers than you may have first thought. Since it’s in the north, where many of the more boisterous revelers tend to leave alone, this offers a relaxing and peaceful atmosphere.

If it is the more intensive and party going vibe that you’re after on your visit to this wondrous island, you should be checking out the infamous Playa d’en Bossa beach, which at a mere 2km from Ibiza town itself, is right at the heart of all the action. With almost all the bars playing loud dance music along the whole of the beach-front, it’s not for the weak-hearted. However, as the starting point for your big night out, it can’t be faulted.

However, one of the most popular beaches in Ibiza is surprisingly not Playa d’en Bossa (although it runs a close second) but the rather wonderful Salines beach. This offers a happy medium between all-out partying and simple relaxation – with a long and relaxing walk along the beach front, interspersed with bars galore on the way to the much-loved ultimate beach bar Sa Trinxa, it’s a great way to ease yourself in to the long night ahead.

Although Ibiza does quite rightly hold the reputation of being the ideal destination for any party-loving animal, it shouldn’t be ignored when it comes to the more traditional kind of relaxing holiday either, as the likes of Benirras and Cala Llonga and the other top beaches in Ibiza will have you discover.

Lancaster County grapples with another teacher death due to COVID-19